Anyone who owns a Tartan with an electric swim step knows there is always the possibility that it will fail to work. Failure is so imminent that Tartan devised a mechanical alternative so owners could deep-six the electric actuator and pull up the step with a series of blocks, lines, cam cleats, etc. That solution will be discussed later.

After 13 years, the swim step on my boat (Cheap Therapy, 2001 T3500) would not go down. It was a sudden failure, not having been preceded by grinding sounds or intermittent operation. For this reason, I assumed—and hoped—the problem was simple, such as a bad switch or crusty connection. 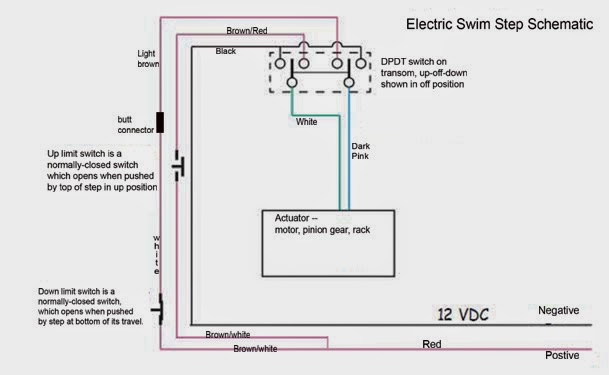 This is a schematic of the circuit on my boat, including wire colors. My drawing is a variation of the schematic posted by Phil Roberts of www.tartan3500.com. As you can see, the circuit is simple and there are only four places where things can go wrong electrically: the limit switches (2), the actuator (motor), or the control switch. (There are a lot of references to switches in this blog. I'll define the control switch as the one used to operate the step.) There are other places down in the lazarette where wires can be loose or corroded—a terminal strip, butt connectors, a three-way splice, and the connections behind the control switch. Some of this wiring is surprisingly vulnerable to moisture, so look for problems.

A brief note on how the actuator works: the motor has a pinion gear on it. The pinion gear interfaces with an aluminium rack that has teeth on the bottom. The rack is connected to the swim step. When the motor turns, the pinion gear moves the rack in or out, pushing the step open or pulling it shut. 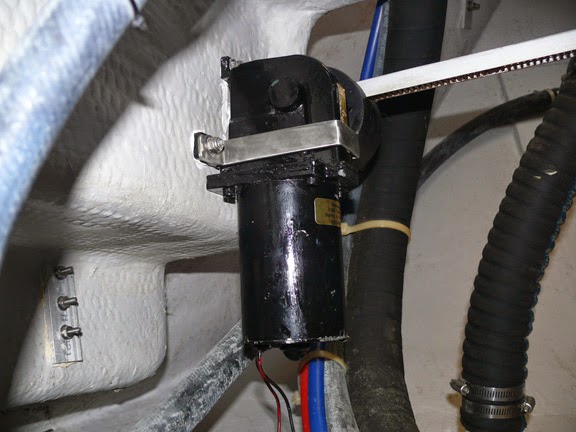 After studying the schematic and lowering myself into the lazarette, I traced the wires, measured voltages, and determined the swim step wouldn't go down because there was no voltage at the control switch. 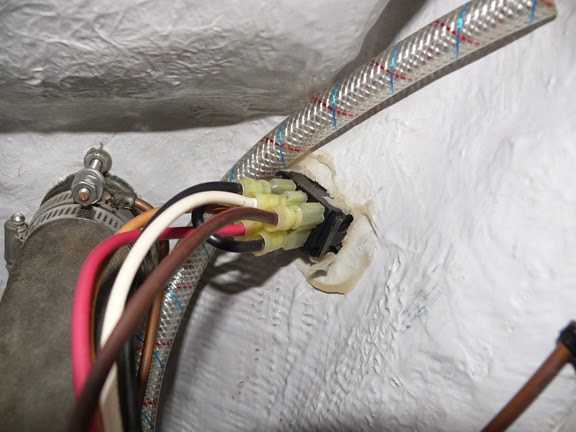 Back of Control Switch on transom

Next, I needed to determine if the motor would work if the lower limit switch were bypassed. For this test, I cut the limit switch out of the circuit and bypassed it with a jumper. The motor worked, so the problem was a defective limit switch. 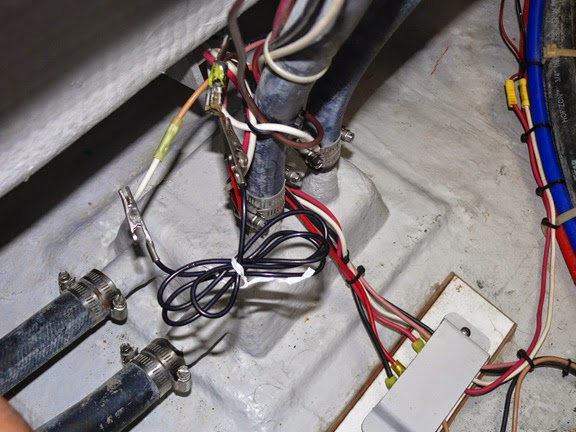 In the photo above, note the terminal strip on the lower right. Granted, that's not the lowest part of the bilge, but I still can't believe Tartan would locate a hot 12-volts where it could be wet. About 18 inches aft is a safer location. Relocating this terminal switch would be a great exercise in prudence.

Next I went around to the transom and tried pushing the limit switch. The switch was stuck closed (the plunger was in), which meant the circuit was stuck open; hence, no current to the motor. (This is a Normally Closed switch, which means the circuit is made, not open, when the switch is not activated. This is the opposite of most switches we work with, but it makes perfect sense.) Due to being wet every time the boat is underway, the switch was DOA. Working it back and forth didn't help.

I gave this problem much thought and research. I arrived at four possible solutions.

1. Throw Away The Electric Motor

The first solution—Tartan's mechanical line-lift system—can be dismissed quickly. Granted, it's a work of art, if you're an engineer. It's about as complex and labor/parts intensive as you can get. Rube Goldberg would have devised a much more simple solution. Art Averell at Tartan was kind enough to send me the PDF of the drawing, but to be able to read and work with it, you need to print it on a large-scale printer—the type used for blueprints. Contact me if you want the original PDF. 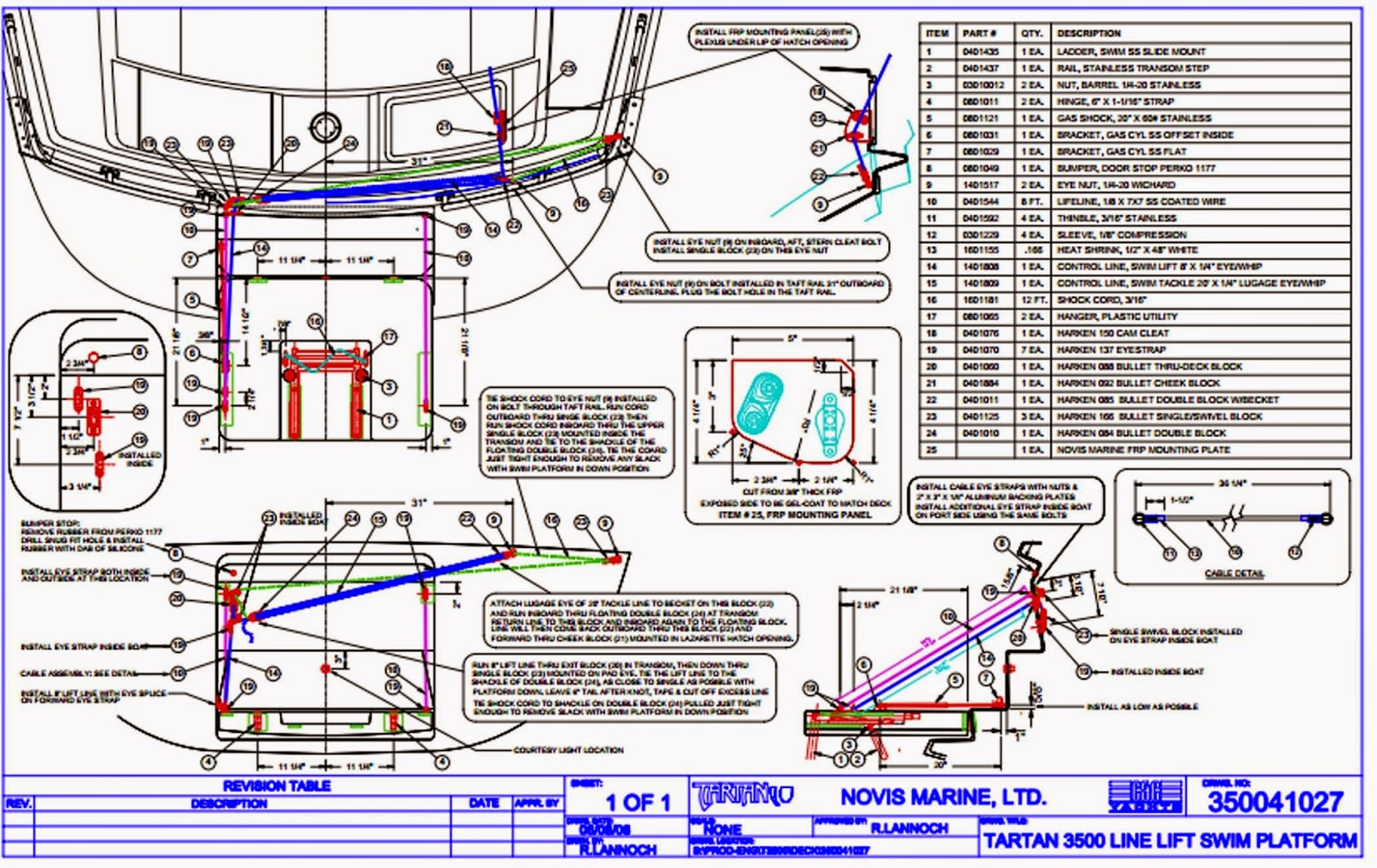 I don't use my swim step often, so I wouldn't invest the time, money, and effort to implement Tartan's solution. Another mechanical retrofit was offered by a member of Tartan Owners of New England (TONE).  It's the polar opposite of Tartan's solution. Judge for yourself.

At a recent boat show I saw many swim steps with line controls. Go to a Beneteau dealer or elsewhere to see how they use double blocks on two sides and a block with a cam cleat. It's an easy installation, but remember-their swim steps are designed to accommodate the line hardware and hide it when the step is closed. We have to work within the physical constraints of our steps; hence, the challenge.

If I were in a situation that required a quick fix, bypassing the limit switch would work and get the swim step functioning again. A more permanent and less-risky solution would be implemented later.

I would not recommend bypassing the limit switch and considering that a permanent fix.You'd run the risk of damaging the rack and pinion if you held the control switch too long. When activated at the right time, a limit switch opens the circuit and turns off the motor so the rack will not strip.

Some people will insist on an OEM solution figuring Tartan knew what they were doing when they design this. It's the most expensive and difficult to install. You'll be lucky if you can find someone to do the job. Getting to the lower limit switch will take an abundance of patience, a very small person or both. Consider yourself very lucky if you have a six-year-old malnourished niece or nephew who loves to be lowered into confined spaces. You'll be miserable if you attempt this repair yourself. Just getting a picture of the switch was a challenge for me.

If you want to pursue an OEM solution, the lower limit switch is an Omron D4A-1109N. It's the one with the top plunger, not the roller. You can find these for $75 or more on ebay and elsewhere. If you're really lucky—like me—you can score one for $28 on ebay. I'm not going to install it; I just couldn't resist a deal and wanted to have it in my back pocket, just in case. I also wanted to gloat about my bargain karma. :) 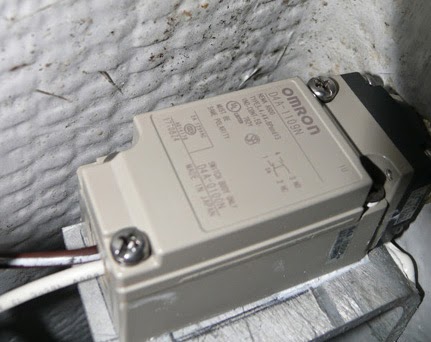 The upper limit switch is an Omron ZE-N-2S. It's much easier to access and, if it it goes bad, just replace it. In fact, if you're going to work on a swim step electrical problem, replace this switch anyway so it's done. As I discovered about five weeks after posting this blog, the upper switch can fail at any time. Given the confined space in which you have to work and get aggravated, you don't want to revisit this issue more than once every five (?) years. 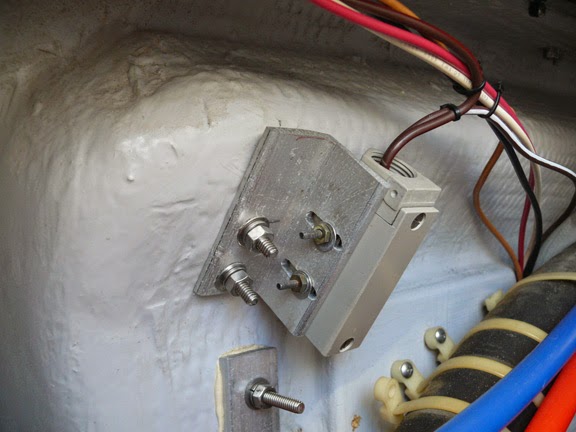 The only reason I would pursue the OEM replacement of the lower limit switch would be either: 1) I'm O.C.D., 2) I'm paying someone to do the work or 3) I'm O.C.D. The OEM solution does not guarantee a long-lasting fix. The previous owner of my boat replaced the lower limit switch twice in 11 years. Including the first one, that means they last an average of three to four years. There are very few other switches on your boat that are so unreliable. When you see where this switch is located, you'll agree there's got to be a better way.

By the way, if you choose the OEM solution, be sure to thoroughly seal the opening around the switch with 3M 4200 or a similar sealant. If the switch leaks, water could get on the terminal strip. It's also important to turn off the swim step breaker when not in use.

I have to thank Chris Hancock for suggesting a magnetic reed switch. They're simple, have no moving parts, are plentiful, cheap, and you couldn't ask for an easier installation. The genius for which I'll take credit is the location of the reed switch. After considering the outside of the step, an Ah-ha! moment lead me to a dry spot out of the weather. I mounted it on the rack and the motor housing! 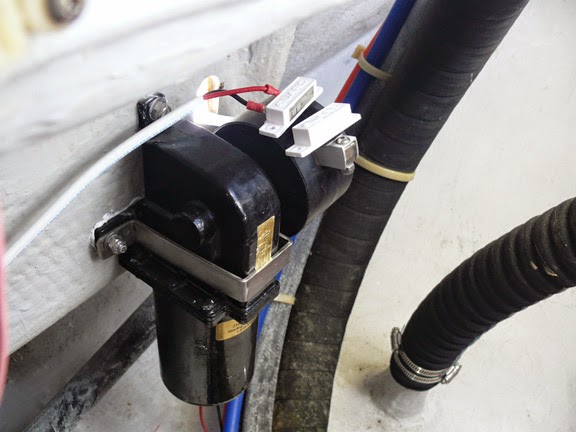 You can buy magnetic reed switches at any electronics store or online. Get the kind that can be wired Normally Open or Normally Closed. Wire it Normally Closed. When the two parts of the switch are not in close proximity (swim step up), the circuit will be closed, allowing current to flow to the control switch, then to the motor, thus allowing the step to be lowered. When the step is lowered, the two parts of the reed switch will come close together, the switch will open, the current will stop flowing, and the motor will shut off even before you release the control button. 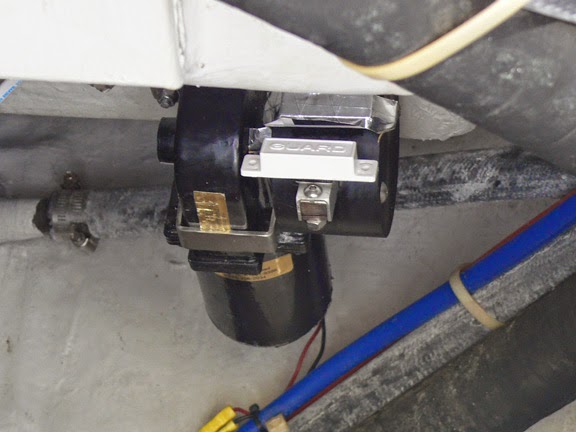 I used the audible resistance setting on the meter, which I would hear until the magnet came close enough to open the circuit of the reed switch. By playing with this set-up, I found the perfect spot for each part of the reed switch. That position was verified after I wired the switch into the circuit and tested it by lowering the swim step. I then used some very sticky tape to hold the reed switch in place. The way you attach it may vary. I may change the tape to something better in the future. Let me know if you have a better idea. 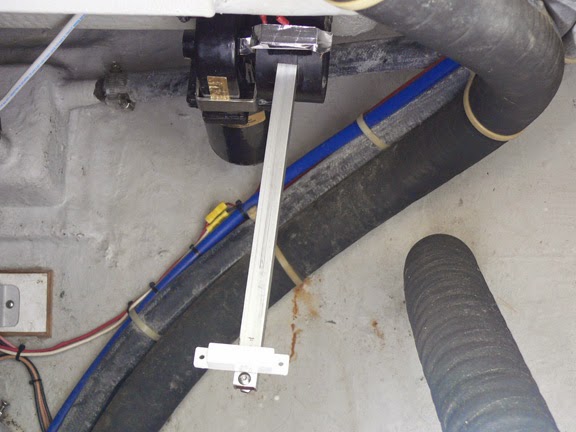 If you wanted a somewhat different solution, you could bypass the lower limit switch—or both switches—by mounting a DPDT (Double Pole, Double Throw) momentary switch somewhere inside the lazarette, at the top of the hatch where it could be reached. The idea would be to hold that switch at the same time you're activating the swim step control switch. One switch could bypass both limit switches. (Think ahead—the upper switch might quit someday.)You would wire 12-volts to the center of the switch and then use each pole to bypass the limit switches. If you read the schematic, this will become clear. The advantage would be ease of installation compared to the OEM option. It would also be fail-safe because only people who knew about the second switch could operate the swim step. The momentary switch would have to be pushed at the same time as the swim step control switch—and remember to release either switch when the swim step is close to or exactly at the desired position. Caution would dictate that, when lowering the step, the switch should be released just before the guy wires pull tight. That last inch might save your rack and pinion.

I hope this write-up helps. I welcome comments by folks who might be more experienced or knowledgeable.

Posted by Garry Schaeffer at 8:45 PM